Written by admin in category  Latest News and Events
August 27, 2018

We seemed to be spending quite a bit of time between Cardiff and Swansea this summer, primarily with birthday parties. The last couple of weeks have not been as hot, thankfully, so has made the moving and setting up of sound and lighting equipment much more comfortable. There’s been a change in of some of the crew – some new guys coming in and still keeping in touch with long term friends, who will always be family.

On the disco front in Cardiff, we had: 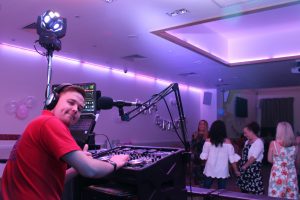 In the city of Swansea, we travelled to Mumbles at did an 80th Birthday Party, for a regular customer at the West Cross Inn, Mumbles, Swansea. We always have a wonderful time with them. Corey and I  did a birthday disco and the Conservative Club, in Gowerton, playing loads of requests from the 90s and quite a few Rock tracks. DJ Diamond Dust made a return visit to the Samlet Club, Swansea for a friend and former neighbour to his birthday.

A return to our regular Summer venue New Minerton Holiday Park, Tenby. We entertained the children with magic, balloon modelling, parachute games and the ever-popular Mascot the Robot Dog. We rounded up the night with disco. 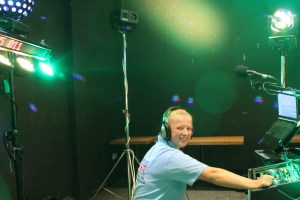 We worked in Whitland Memorial Hall for a 7th birthday Party, which is not far from our usual venue in Tenby. The usual routines with magic and the Robot Dog were a great success. We ran more lights and had a chance to use the smoke machine. Quite a few venues don’t allow this as more and more places have smoke detectors.

It’s been a great summer with lots of people to meet and lots of places to see. The adventure continues!